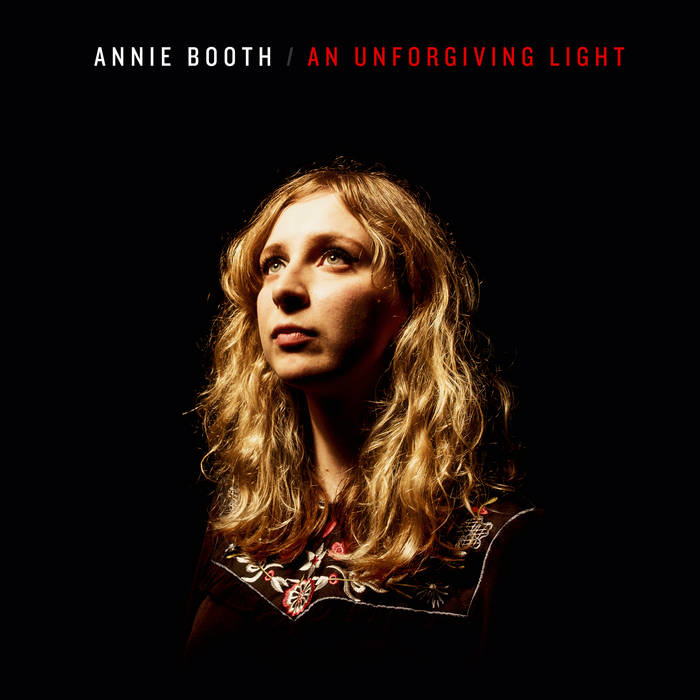 Pick up a copy of the stunning debut album, 'An Unforgiving Light', from Annie Booth on 12" vinyl. Brought to you jointly by Scottish Fiction Records and Last Night From Glasgow, and presented on inky black wax complete with download code inserted.

A joint venture from Scottish Fiction and Last Night From Glasgow, the record is an ambitious solo effort of puncturing melody and raw lyricism in the vein of alt-rock titan Jeff Buckley, marked by the contrasts of folk roots paired with alt-rock backing, and urgent instrumentation contrasted with introspective vocals.

The album starts as it means to go on, opening with the honest and tender 'Demons'. Annie introduces herself in the most personal fashion in a track weathered with vulnerability and reflection. From here, the record opens up to more sonic possibilities on 'Over My' and 'Little Lies', stretching Annie's excellent vocal capabilities as the backing grows in stature and strength.

The record's middle section tackles poignant universal issues such as apathy, anxiety, and a loss of faith, making it's way through a wide variety of musical textures: from delicate arpeggios, to dynamic rhythms, to glacial hymn-like vocal climbs.

Perhaps 'An Unforgiving Light's greatest achievement comes when it reaches the crescendo of 'Reverie', a track which manages to combine many of the motifs – both lyrical and musical – of the previous seven tracks. The record comes home with the ethereal coda of 'The Line', which features a subtle backing performance from Mt Doubt's Leo Bargery.

All songs composed and arranged by Annie Booth. Recorded, mixed and mastered by Mark Morrow. Vocals and acoustic guitar by Annie Booth, electric guitar by Ross Campbell, bass by Craig Stoddart, drums by Rohan Bumbra and keys by Katie Ross (with the exception of ‘The Line’; played by Annie Booth.) Additional vocals on ‘The Line’ by Leo Bargery. Artwork by Brian Sweeney and Colin McArthur. Many thanks to Neil and Ian.

Annie is a young singer-songwriter based in Edinburgh. Performing her indie-rock tinged folk throughout Scotland, she creates melancholic songs with infectious melodies.

Bandcamp Daily  your guide to the world of Bandcamp